I took Daniel to get his hair cut then to get his 4 year old pictures... while we were waiting on them, I picked up a few things from Target.... my kiddos love these carts! 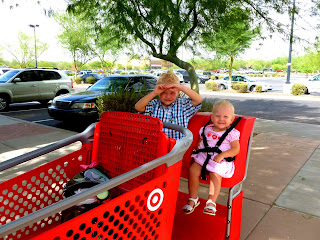 Katelyn finds shopping carts very comfortable... for some reason, she has made a habit out of falling asleep in shopping carts recently:) Maybe I just have had her out past her nap time more but I have caught her asleep several times and it is just sooo cute! 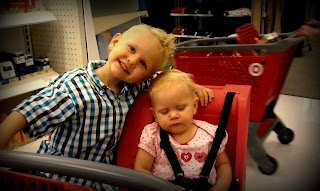 The important thing in the below picture is to look at how much hair Katelyn WAS accumulating! As you know, I have been the cheer leader for every strand of Katelyn's hair as it has come in from her birth and it was starting to grow... until Daniel decided to cut it! Yes, I walked in on Daniel cutting Katelyn's hair... she was so content as she thought they were playing "beauty shop!" Daniel saw how upset I was and said, "Don't worry, Mom, I only cut a couple of hairs!" Meanwhile she was sitting in a pile of her hair and I grieved for a whole week after that and had to daily walk in forgiveness towards Daniel as I was so upset. 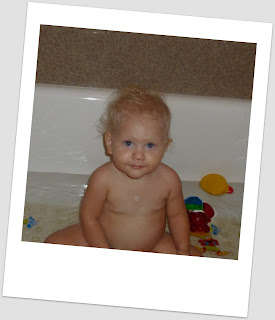 The other thing I wanted to point out is that as much as she is a little peanut (according to her percentiles), check out the rolls she has kept! They are just as delicious to sink my teeth into as the newborn days! I am sad to say, they are shrinking by the day though:( Yes, she is still our cuddle bug... she loves kissing and giving BIG hugs... she throws both hands around your neck and squeezes tight... it is so adorable! 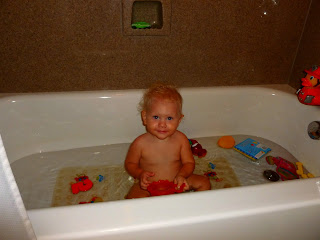